At a Maine Wind forum May 20, 2010 at the Rockport Opera House, locations  as varied as Ragged Mountain, Vinalhaven, Monhegan and waters 20 to 50 miles offshore were discussed. The key speaker University of Maine’s Habib Dagher, PhD, leader of the DeepCwind Consortium said that the conflicts over the siting and effects of land-based and nearshore windfarming on health, the pursuit of happiness and the natural environment  are serious and insoluble sources of social conflict. 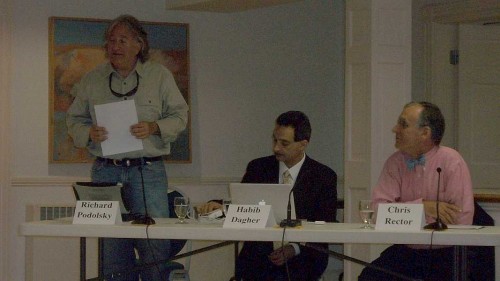 Instead, Dagher told his audience, deepwater floating windstations 20 to 50 miles offshore will be much more powerful and reliable, and won’t harass their own consumers & wildlife with flicker, noise and infrasound.  The DeepCwind Consortium has received tens of million of dollars to lead the nation in deepwater offshore windpower R&D.   Listen to podcasts of he and other speakers and audience participants below.

Other topics at the forum: a plan for a windfarm on the Camden Hills’  Ragged Mountain, Island Institute on midwifing community wind on Vinalhaven and on its efforts to raise enthusiasm for onland windmills on Monhegan,   Swans Island and Frenchboro,Des Fitzgerald on his novel deepwater windturbine device and  more. A lively Q&A session, too!

Click Here For Part Three of the Forum ( 50 minutes) Des Fitzgerald, Ragged Mountain proposal; Question &  Answer session.  Scott Dickerson of MCHT -speaking on his own behalf (1 minute)  was not pleased by the Ragged Mtn windfarm plan; why not, he asked send the investment and talent toward  over-the-horizon offshore windpower. 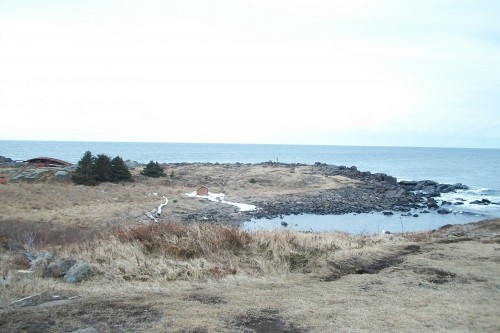 The “thirty pieces of silver” bill.

Some here have wondered about what sort of economic benefits Monhegan might gain from becoming  “host community” to the University of Maine’s wind turbine research operations. What wergild, if any, would be acceptable?

Today at the Maine Legislature,  there was a work session of the Utilities and Energy Committee on LD 1504, which has been renamed and entirely rewritten  as  “An Act to Provide Predictable Economic Benefits to Maine Communities that Host Wind Power Projects.” (copy not available)

To listen to the Committee discuss the LD 1504 on Feb 2, 2010 with Pete Didisheim of Natural Resources Council of Maine, Click Here (15 minute mp3.)

This bill is a try at establishing a payout system to compensate Maine host communities for wind extraction-related degradation of their scenic and other natural assets by the sonic and visual pollution that is sometimes a byproduct of contemporary wind turbine technology.  Compensation is also
being  considered for the no-go areas around and above wind farms set up for safety and security purposes.

Highlights of the worksession At the worksession the Utilities and Energy committee’s staff policy analyst Lucia Nixon  said that  the re-written bill  “will specify community benefit agreements that windpower developers be required to have with host communities, and the nature and level of payments under those agreements, provide more specificity in the statutes regarding tangible benefits, and the documentation of those benefits.”

She said the stakeholders (who are they?)  were charged a week ago by the Committee to work together. They met last  Friday, and the Utilities and Energy Committee staffer has been reviewing these stakes’ drafts by email as late as noon today. (2/2/10)

Pete Didisheim of NRCM  spoke at the work session for the selected group of stakeholders who are hammering out the wording of the bill.  Pete told the committee that they’d come a long way in the last week but were “not quite there yet“.  He said the discussion group expects to be done by Tuesday February 9th and would  deliver something  “that  has the full support of the stakeholders and all the parties, and fully vetted through the agencies, the wind comunity and all the interested parties.”

At present, however, he said there are “still a few issues. So rather than present it in its current form, we’d like  to bring you the final product. when we can walk  through it carefully and  describe exactly what we disagree on.”

One of those issues is who levies such a tax? The affected municipality? The state? Federal government?  “There’s quite a bit of concern as you can imagine,” Pete said,  “about that potentially being siphoned off to…other areas”

So have Pete and other stakeholders been talking to Monhegan?  Are Monheganians feeling “vetted”?

Wind Off the Water

Conservation activist & deep ecologist Ron Huber has asked Maine Superior Court to rule on whether Maine Bureau of Parks & Lands Director Willard Harris followed  two recently passed state laws, 12 MRSA 1868  “Identification of Offshore Wind test areas and  MRSA  35-A, Chapter  34-A: Expedited Permitting of Grid scale Wind Energy Development when on December 14, 2009, he authorized the Monhegan test area, one of three in Midcoast and southern Maine waters. Read Ron’s media briefing explaining why he decided to file the case, his relationship with Monhegan – and media reactions to the case so far.

Background. Maine’s Legislature and Executive Branch have authorized the University of Maine to occupy a roughly 2 square mile deepwater tract 2 miles “south and seaward” of Monhegan Island to test build two deepwater floating wind turbines: a 100 kilowatt wind tower and a ten kilowatt one. Funding sufficient to get the project underway has been secured. As politicians, agency staffers,  academics, entrepeneurs, NGOs and  even two high powered public relations firms are already hard at work on this, so too should the interested public be!   Information is power. Charge yourself up here: Links to documents, reports, charts, maps, photographs, deadlines, contacts, key personnel involved and other information sufficient to equip the viewer for meaningful involvement in this process, and provide a forum for the sharing and vetting of important information as it arises.

Your participation, is of course vital to bringing the essence of Monhegan into the decisionmaking mix.   Issues of truth and beauty abound; who  better than those who love and/or live on Monhegan to guide and shape the outcome?