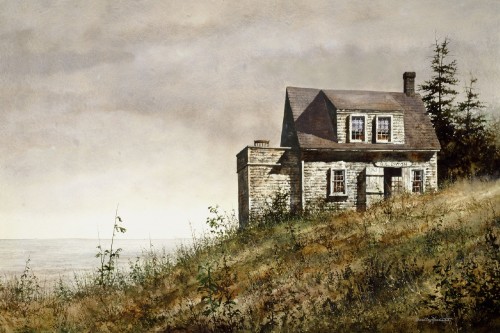 signed lower right
“John Sterling’s Cistern House, also known as Uncle Henry’s, was built on Monhegan Island around 1815. Originally known as the Cistern House, as it protected a water supply, it became known as Uncle Henry’s in the 1930’s when Henry Shaw used it as a place from which to sell his fresh produce and milk, which he brought to the Island once or twice a week. The building was gutted by fire in July of 1979, and was rebuilt with the chimney at the opposite end. This painting was done on location in August of 2006. Although the building is fairly accurately rendered, some artistic license was employed in the surrounding landscape in order to evoke the feeling of windswept Monhegan Island.”- Bradley Hendershot