Down To The Wharf by Kevin Beers 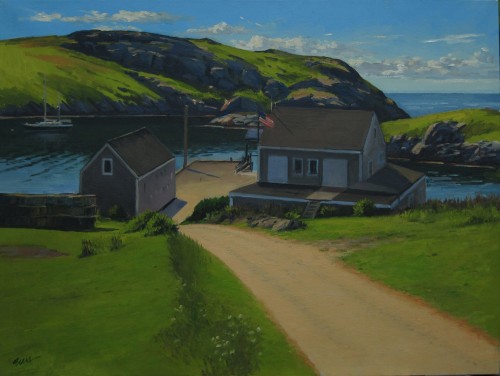 “Down To The Wharf – another fave. It’s a biggish one- 27X36- It’s another favorite motif. Two summers ago I painted 16 canvases of exactly the same view with the same composition,  The only thing that changed was the light and time of day. They started at 5:30 AM and went to about 8PM. When I’d be painting a painting of the scene the light would change and I’d think “well this is really nice too” so I’d want to do another. So that summer I made a formal thing out of it and did one painting after another as the light changed. It was fun and fascinating to see the differences from one to another. I understood what Monet saw in doing series. I love how the light changes as it rakes over Manana. Manana changes – not only the shadows but the colors themselves. It’s as if Manana is a screen that light is projected on. This one feels like a Maine summer day to me.”- Kevin Beers