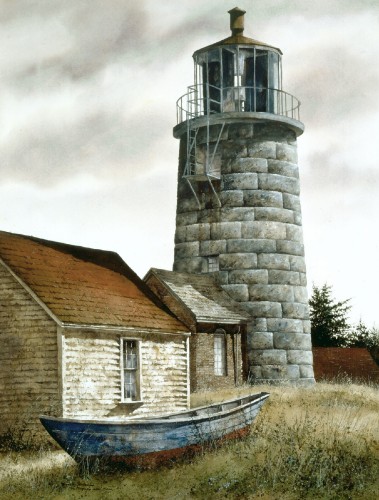 “This drybrush was painted on location on Monhegan Island, Maine, in August of 2005. The painting started out as a fairly loose watercolour, but I became involved with the texture of the granite blocks that make up the light tower. I believe that the granite came from the island of Vinalhaven. The forty-seven foot tall tower was built in 1850, and is the second light tower on this site, the first having been built in 1824. The beacon is 178 feet above sea level, making it the second highest in the state of Maine (Seguin is two feet higher at 180 feet). The light was automated in 1959. The brick “service room” was added onto the entrance to the lighthouse in 1892. The building just behind the dory is known as the tool house.”- Bradley Hendershot