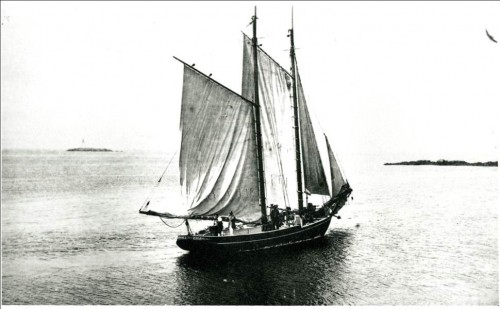 Image provided by the Monhegan Museum

Captain Humphrey delivered the mail first from Port Clyde 2x per week , then in 1884 from Boothbay. First from his sloop, the Goldsmith Maid and then from 1888 from his schooner, Effort. Captain George F. Brackett took over the Effort in the 1890s. In the book, An Eye for the Coast the story is that sometime in the 1800s a gasoline engine was installed and that a guest invited onboard to admire the new device, lit his pipe and dropped his match in the bilge, igniting fumes. The Effort’s last appearance in the List of Merchant Vessels in 1907 suggests that modernization, the explosion and subsequent retirement occurred around 1907.