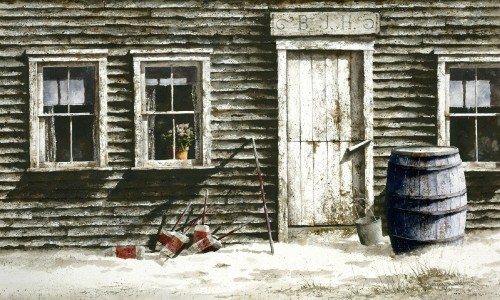 “Here’s a statement that I wrote several years ago about the house in this painting:

‘ From the first time I ever got off of a boat on Monhegan Island, Maine, I have been intrigued by the large, rambling, old house that sits atop Wharf Hill overlooking the harbor. You can see it’s present owner, sitting on the knoll most summer afternoons, at the top of Wharf Hill, watching the events in the harbor. Known officially as the John Sterling House, it is one of the oldest houses on Monhegan, dating to 1809. It is in disrepair—boards falling off, dark and looming. To me, it conjures up images of Shirley Jackson’s The Haunting of Hill House, Nathaniel Hawthorne’s House of the Seven Gables, and Stephen King’s Marsten House (in ‘salem’s Lot). I have never been in the house—maybe it’s best that I don’t go in; maybe it would take all of my feelings away, when I saw that it was just an ordinary house inside instead of the haunted house I’ve imagined.’

Well, in the summer of 2007, I went into the house, as the owner, now in her 90’s, has moved off-island. She subsequently passed on during the winter of 2007-2008. The house has been fixed up, with new roof, new windows, and new clapboard siding. It is now divided into two halves, each one a rental unit. I decided to do a drybrush of the front façade as it was before repairs, and for some reason, I’ve placed a placard above the door with my initials, “BJH”, carved into it. This must’ve been some sort of sign, as several weeks later, I decided to move from my Monhegan home of a dozen years and rent the right-hand half of this house, now called the John Sterling Harbor House, beginning in the summer of 2008. My front door will be none other than the door over which I placed the initialed placard!”- Bradley Hendershot