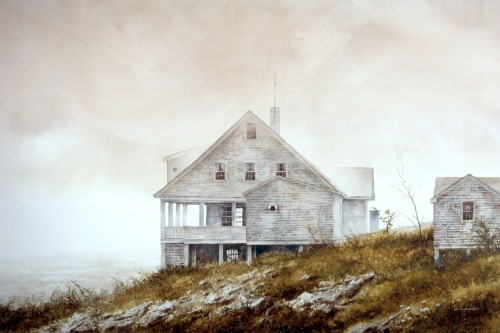 “The concept for this painting began more than a year before the final work was completed. I was doing studies of Jamie Wyeth’s house on Monhegan Island in the fog. A young man of the Jewish faith, named Menachum, approached me and asked if I minded if he said his morning prayers next to me. He thought that this was one of the most beautiful locations he had ever seen. The man adorned a hooded robe and commenced to kneeling and saying his morning prayers as I sketched the fog-bound house. The man had trouble envisioning my finished painting based on the few quick notations of my sketch, and quoted an old Jewish folk saying ‘Never show a fool half a job’. The large watercolour Morning Prayers, measuring 31 by 46-1/2 inches, was completed in the studio more than a year later, with my memories of that day vividly in mind. The painting depicts Jamie Wyeth’s house, known as the Kent House, at Lobster Cove. The house was built in 1908 by artist Rockwell Kent for his mother, Sarah. This is one of my favorite locations on Monhegan Island–the area around Lobster Cove and Lobster Point, at the southern end of the Island. I make a point of walking to this area almost daily to watch the surf pounding the rocks.” – Bradley Hendershot