(1) February 4, 2010), attorney Jeffrey Thaler of Bernstein Shur contacted me to discuss having his two new clients – the University of Maine System and the DeepCwind Consortium – becoming intervenors in my case against the Bureau of Parks and Lands decision to designate, 2 miles south of Monhegan, the Maine Offshore Wind Research Center. 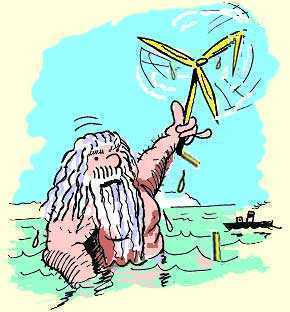 While I have assented to the University of Maine as intervenor, I have also made my misgivings clear to the court about the prospect of the DeepCwind Consortium intervening. Remember: the case is simply: Did the Bureau of Parks and Lands follow the applicable state laws and regulations when it designated the Monhegan Offshore Wind Test Area or not?

The University of Maine was deeply involved in the planning and research; it is sensible for the judge to be informed by them of their role in the designation process. But the DeepCwind Consortium – a forward-looking group of investors, entrepreneurs, engineering & law firms, NGOs, retired politicians and the like, focused on exploitation of the research area AFTER it is designated – played no role in the BPL’s decision. They hence have nothing to offer the court but much irrelevant and after-the-fact sound and bombastic fury. Superior Court Justice Jeffrey Hjelm is said to view such water-muddying displays of lawyerly virtuosity with distaste, anyway – so why clutter the record?

But then a copy of Atty Thaler’s February 4, 2010 motion to intervene arrived in the mail asking the judge to indeed let him represent both U Maine and “DeepCwind Consortium” as two intervenors in my case. He asked for an expedited decision, suggesting that I was okay with both entities getting into the case. As I immediately informed the court in my response he was quite mistaken, I noted that the various entities that make up this consortium are, of course free to apply individually to intervene.

(2) Assistant Attorney General Amy Mills is going to represent the interests of the Bureau of Parks and Lands viz this case. She is a veteran attorney on natural resource-related litigation and enforcement. Mills’ and the Bureau of parks and Lands’ first order of business is to “compile and produce the record” on which BPL based its decision, then send a copy to me and a copy to the judge. This could take some time, as, according to another attorney familiar with the Bureau of Parks and lands decision: “\“There’s quite a volume of material” , adding that BPL will likely ask for a time extension to produce its materials.